Tidbits of the Dead: After

Just when I thought I was out, they pulled me back in!

I’m a bit rusty, but fortunately this episode was light on the complicated plot points. This episode follows Rick and Carl as they flee from the zombie madness that the prison became. We also follow America’s favorite scowling samurai Michonne as she gets some new zombie pets and also flees. Joy!

He is the least consequential character in this episode, as he fights a bit with Carl, fails to fully hatchet a zed in the head, and eventually passes out for a day-and-a-half. There was a brief is-he-or-isn’t-he-a-walker scare, but readers of the comic knew that he would pull through. The mid-season finale had a few iconic shots that were lifted from the comic books, but this entire episode was a bit of a self-contained arc in the comic as well. The dynamic between Rick and Carl works here too, but I felt that it was actually a bit better in the comics as Carl was then still his young child-like self.

The zombie apocalypse only exacerbates teenage angst. Rather than just idiotically running around the woods and taunting zombies, Carl is now cockily and idiotically running around the woods and killing zombies. It is interesting how he has turned survival into a sort of game, proclaiming, “I win,” when he scavenges more food than his father, as well as when he narrowly manages to kill 3 zeds that fall on top of him. If this show wouldn’t completely fall apart without the kid I’d have a bit more suspended disbelief, but I just can’t believe that AMC would kill off Carl and leave Rick a widower and childless. I wonder if Carl will bring up Shane again, or if he has got all of this rebelliousness out of his system.

Rounding out this episode is a bit of character development (about a season & a half too late) for the sword-wielding badass of the group. The best, and most confusing, shot of this episode was the dreamlike (well, actual dream!) scene involving Michonne remembering her brother and lover, before her child Peanut runs up and jumps into her arms. Sadly, Michonne seemed just as awkward in this scene as the other times she tries to not be a badass. Establishing her missing family members at this point seems a bit too late to be genuine. But, I suppose it explains why exactly she has been so reluctant to form any sort of bond with the last few people living in Georgia. Also, she killed Walker Hershel. 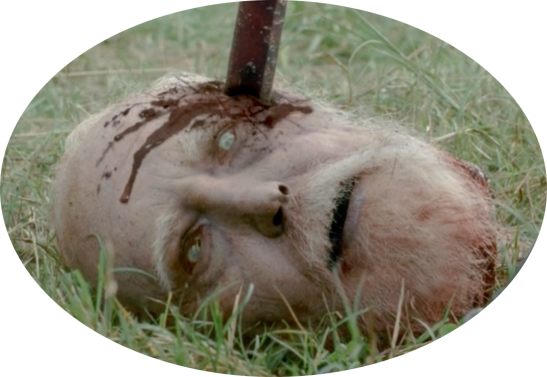 Geek of the Week

Which brings us to this episode’s most memorable zombie. It has to be Hershel for me. He looks a bit despondent lying there on the ground, but Michonne mercifully puts him out of his misery. Unfortunately, she isn’t kind enough to do that for any of the other dozens of walkers she beheads in this episode.

Michonne leading around two walkers on a leash was a very cool introduction to the character in the comic book. Here it just seems a bit silly, especially when it is established that her previous two pets were known to her in her real, before the end of the world life. Theoretically it would make up for them being just two random walkers and I would also assume that it took a while for them to calm down to the always present meal before them. But here she was able to de-jaw and de-arm two zombies and tame them in the space of a commercial break. I guess my main question is this: why the hell aren’t they still trying to gnaw on her with their top incisors?

In the next episode I predict more of the same. It will be a lot like this one, only focusing on different characters. Will Glen and Maggie reunite? Will the psychotic children get to Tyreese? Will the Governor’s lover and her sister reappear? Will Beth sing a sad song? Will Darryl eat a squirrel? But, the most important question is this: will a busfull of redshirts all namelessly die? Find out next week’s episode, “Inmates.”

This entry was posted on 10 February 2014 by Axe-Wielding Alex. It was filed under Television Terror and was tagged with The Walking Dead, Zombies.