The Twelve Slays of Christmas 2013

For the eighth slay of Christmas, this genre gave to me, crazy dancing eyebrows, Santa vs. Zombies, the anti-Santa Nackles, BILL GOLDBERG!, four creepy songs, Tales from the Crypt, Santa’s demon Krampus, and a scream queen hanging free!

After taking a day to recover from the seventh slay of Christmas — the horror that was Santa vs. The Zombies, bourbon, and an open mic — the list has returned with the Yuletide Schlock Classic that is Silent Night, Deadly Night 2! 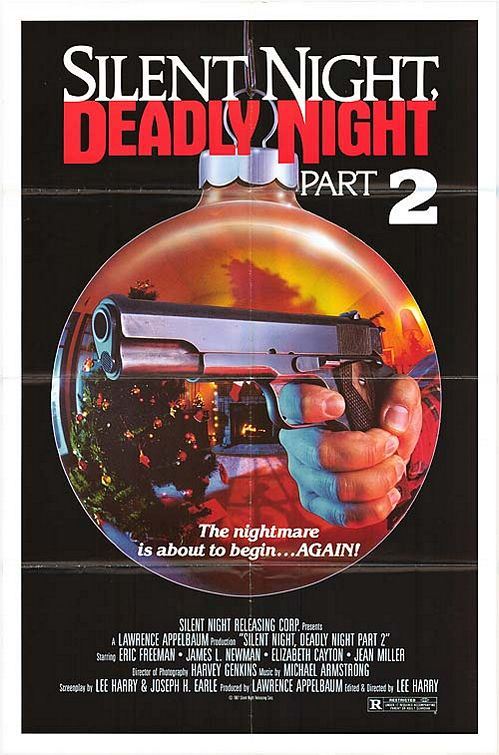 If you haven’t seen the first Silent Night, Deadly Night film, don’t fret, because the first 40 minutes of this sequel recaps the entire previous movie. All of the kills. Both psycho Santas. The gratuitous sexy bits. All of the gore and none of the goodness! It really is quite amazing how they were able to include just about everything of importance from the first movie — minus the crazy grandpa and the working-at-a-toy-store montage. Then there is another 40 minutes or so of new stuff that is less rushed, less focused, and more crazy than everything from the previous film. (There is an excellent write-up on FEARnet that tells how the producers actually just wanted the editor/director Lee Harry to recut the first movie into something entirely new and different, but fortunately for us fans of terrible cinema, they were able to add some new stuff into the mix.

I won’t go into everything that Psycho Billy did in SNDN1, but I will say that Psycho Ricky tops anything his brother did in his night of mayhem, simply due to actor Eric Freeman’s outrageous portrayal. The story is like this: Ricky has followed in the genetic footsteps of his brother, and like his grandfather, has ended up in some sort of mental hospital for the criminally insane. On Christmas Eve, he is visited by a psychiatrist to be interviewed about his past transgressions. After retelling Billy’s story, Ricky gets into it about how he was adopted by a nice Jewish couple — from a Catholic orphanage — who seemingly shielded him from the horrors of Santa during his childhood. This doesn’t last too long however, as a chance encounter with two nuns and a thick red cloth set off all of his old memories. From this time forward, he gets set off whenever he encounters a tense situation along with the color red.

His first kill is to a would-be rapist, who he runs over with a red Jeep. Later, after growing up a bit, he kills an extortionist in a back-alley (with an umbrella through the belly) because he had a red handkerchief and needed to be punished. He kills an annoying guy wearing a red shirt in the world’s most brightly lit movie theater. He kills his girlfriend’s ex with a car battery jumper cable to the tongue. You guessed it — the car was red. Unfortunately, this is the tipping point for young Ricky, because he then proceeds to kill everyone else in the nearby vicinity. His girlfriend gets it, because she freaked out about her ex’s death and also needed to be punished. This probably wasn’t the reaction Ricky was expecting since the woman whose attempted raper he killed thanked Ricky.

He then kills Barney Fife whose firearm lets Ricky continue his shooting spree, killing a football player, a poor soul casually taking out his garbage (despite gunshots in the neighborhood), and an explosion-prone red car. However, he does not kill the little girl with a red bow in her hair riding her tricycle around an urban warzone. She wasn’t naughty enough. The most senseless of these kills — the man acting out a simple garbage day routine — has since been immortalized in this oft seen clip:

The viewer get a bit of Eric Freeman’s dancing eyebrows in that clip as well!

Eventually the cops — better armed and less idiotic than before — catch up to Ricky, but they are more concerned about him foolishly throwing his life away with the revolver at his temple than trying to put down this spree killer. Afterwards Ricky ends up behind bars where doctor #13 has just finished with his interview. He’s finished also finished with his life, as Ricky has claimed another victim by strangling the doctor with his own audio tape. After making an off-screen escape through the orderlies, Ricky finds and kills a Santa Claus, relieving the poor guy of his suit, and makes after Old Mother Superior.

Ricky sets off to finish what his older brother couldn’t accomplish. While Ricky goes after the old wicked nun, the nun accompanying the police, Sister Mary, informs them that Mother Superior has retired, lives alone, and has had a stroke. Judging by her face, she must have had that stroke next to an open fireplace. Ricky easily finds her, and the cat-and-mouse games begin between the Psycho Santa Brother and the world’s strongest nun confined to a wheelchair.

I don’t want to spoil things if you haven’t already seen it, but suffice it to say, you’ll hear some great lines before the closing credits start. Here are some of my other favorites from Silent Night, Deadly Night 2:

I DON’T SLEEP! — Ricky, when asked if he has nightmares

You’re good Doc, but I know all the moves. I could squash you like a bug. — Ricky to the Doc

Fuck this! I’m getting a beer. But I’ll be back! — Attempted Rapist to woman after being kicked in the balls

Red car! Good point! — Ricky to the Doc after he writes this in his girly handwritten notebook

Sounded like some squirrel getting his nuts squeezed. — Ricky about a man being harassed by an extortionist

Overall, Silent Night, Deadly Night 2 is not as good as the first one, but most slasher sequels aren’t. This film was less serious than the original, and much more fun overall. It is oozing with camp, and the first 40 minute recap can be pretty boring if you’ve recently watched part one. In terms of my list so far, this movie is miles ahead of Santa vs. the Zombies, but not quite as enjoyable as Santa’s Slay. Technically though, it is a fine film as the editing and music are both strong. Sadly, the atrocious acting (and those damn dancing eyebrows) puts this out of the realm of scary. This film is like that hideously designed, itchy sweater your great aunt made you that your mom makes you wear to the extended family X-mas get-together.

Until tomorrow, keep squirming in that sweater, and keep those eyebrows dancing!